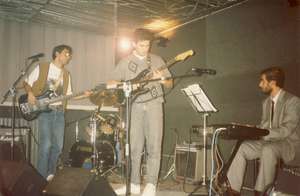 Just Dust were Massimo Morichelli on bass and voice, Francesco Iannuzzelli on guitar, Massimiliano Valerio on keyboards and Matteo Pozzi on drums.

For a few years in the 90s they proposed a mix of progressive rock and blues with classical influences to audiences in the underground scene of Milan, Italy.

They released one work on tape, "Preludio all'alba" (whose cover is shown here on the left), published by M.A.P. in 1992. Here are a few tracks:

Here you can also listen to "Along the War", recorded live at Magia Music Meeting (Milano) on 2 April 1992: Along the War